I’m a little over a month in to Getting Things Done, so I thought I’d provide an update.

As I wrote in my Starting to Get Things Done post, I’ve set myself up in my new office with a physical in-tray, Outlook for my email and a task management app. I ended up going with OmniFocus 3, partially because most podcasters I listen to recommend it and partially because I got education pricing on the Mac version.

I try to keep my inboxes as low as possible throughout the day by knocking out any less than five minute tasks as I get the chance. This wasn’t much of a change for me. I’ve always kept tabs on those sorts of things throughout the day. The difference is that now I shut them out when I’m working on larger projects.

Managing Projects in the Workplace

Those larger projects have been the main focus of my new GTD system. My role in the university invovles communicating with a lot of stakeholders and managaing a lot of collective input. Through the liberal use of tagging in OmniFocus I’ve managed to keep on track of tasks and thoughts for about a dozen coworkers at a time. Every time I walk into a meeting I pull up the tag for that person and work my way through the list of things left outstanding between us. It’s been particularly helpful with those that I don’t see every day.

I’ve also found the weekly review (recommended by GTD and built-into OmniFocus) to be a great way of catching up on projects that may be buried in someone else’s inbox. As we get closer to holiday travel projects often tend to get stuck in limbo, waiting on deliverables from who know’s who. A simple weekly check-up has helped me at least keep tabs on where things are which eases my mind. 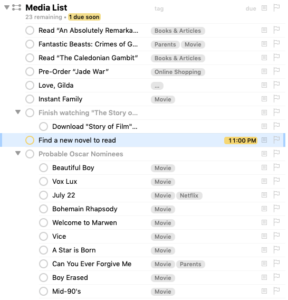 Throughout Getting Things Done, David Allen advocates for employing his system throughout your entire life no matter how awkward it may initially feel. I was reluctant to project manage my home and social life, but after a month of admittedly minimal implementation I’m sold.

I’m not tracking every potential social interaction or routine task as a box to be checked. That would be ridiculous.

Instead, I’m trying to keep lists of potential ways to spend time when I’m bored rather than endlessly scrolling on Twitter.

For example, as Oscar season approaches I’m building a list of movies to see in anticipation of the nominations. I’ve also got a list of local restaurants and bars I want to check out. Another list is full of small improvements I want to make around my apartment.

Keeping track of these things in OmniFocus and tagging them properly has helped me avoid those painful indecisive conversations like “Where should we go for dinner?” or “What should we do this weekend?” Now I have a long list of things past me was interested in that I can filter through my mood and run by whoever I’m meeting up with. I should have started keeping those lists years ago.

On the whole, I think this was a great move and one I should have made a couple of years ago. The Getting Things Done system and its insistence on coimpletionism matches up well with my way of thinking.

Writing down every little thing I want or need to do has been great for me. It freed up a lot of my mental energy and minimized the sense of always feeling like I was forgetting something.

I’d highly recommend it to just about anyone.