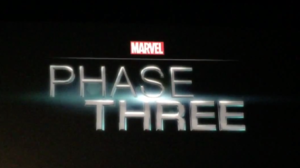 It took me long enough, but I finally got caught up on the Marvel Cinematic Universe. After watching Ant-Man and the Wasp I can now recap the third phase of the MCU. I should note that there are two forthcoming films that fit into this phase. But I wanted to write recap everything up to this point while things were still fresh in my head.

Civil War is basically an Avengers movie in everything but title. Marvel had signed a deal to do three Captain America films, but the plotline they were building toward required a lot of other characters. And so Civil War is a crowded, fast-paced ensemble feature that pulls no punches. Every hero introduced so far gets a cameo and Spider-Man is triumphantly introduced after being from the evil clutches of Sony.

I watched this at home, years after the theatrical release, and it didn’t hit me as hard as I expected. This movie was such a big deal when it came out that I already had an idea of most of what happened. The ensemble experience of the first two Avengers films definitely shows here. Everyone gets equal time and some semblance of a character arc. I actually wanted a little more Captain America, but I can see why he had to lead from the sidelines. This is the first time (of many) where it feels like the MCU is pushing toward something as a unified front.

I expected to dislike this movie, based on what I’d heard about it from Marvel die-hards. However, I actually thought it was pretty awesome. The effects and art direction, in particular, are truly impressive. I love the way Strange uses time as a weapon in the climactic fight sequence. It’s also cool to see Inception style gravity-bending turned up to eleven. Definitely going to re-watch this one and comb through some of the more visually intricate scenes again.

Guardians of the Galaxy, Vol. 2

Like the first Guardians film, I saw this one during its theatrical release. It retains the sense of fun and goofiness of the original, but gets a little too tied down in a cliche’d family reunion plot-line. I really enjoyed Chris Pratt as Peter Quill in the first film, but he is the second least interesting person in this sequel. Basically everything involving Kurt Russel’s portrayal of Ego the Living Planet is a frustrating exposition dump. The color palette is brighter and the jokes are goofier than ever before. Also, there is Baby Groot.

I’ve always been a huge fan of John Hughes’ seminal ’80s coming-of-age flicks. Homecoming is a love-letter to Hughes and high school where the nerdy protagonist also happens to be Spider-Man. Tom Holland plays a bumbling teenage Peter Parker perfectly. The Vulture is a decent vilalin. There’s a nice twist. Tony Stark is also present. After the epic scale of some of the recent MCU films, it is nice to have a smaller entry into the canon that includes a few good laughs.

Where The Dark World was a miserable slog through a sea of grey, Ragnarok is a lively jaunt thorugh a technicolor dystopia. The unlikely team-up of Thor and Hulk (spoiled by the trailer…ugh) makes for a unique chemistry. Jeff Goldblum is basically just playing his ridiculous self. Tom Hiddleston chews up and spits out every inch of scenery he touches. This film really feels like a tour de force.

Acclaimed director and first-time MCU contributor Taika Waititi makes the most of the comic book craziness here. The fight scenes are over-the-top, the art direction is ridiculous and the actors genuinely seem like they’re having a blast with it all. I really hope he gets to make another blockbuster like this soon.

The hype was so loud and the praise was so effusive that I skipped Black Panther while it was in theaters. It’s an amazing film deserving of some serious award consideration this year. There’s nothing else I can say that hasn’t already been said.

Was it ambitious? Yes.

Was it a cross-over event? Yes.

Was it the most ambitious cross-over event of all-time? Maybe.

Infinity War is the first time in this franchise where I honestly forgot I was watching a film. This feels more like a season finale of a streaming drama series than a movie. There’s almost no introduction to the plot, very little character exposition and no resolution. The effect is somewhat dizzying, especially with its breakneck pacing that makes 160 minutes fly by.

The last ten minutes of this movie have been the subject of a lot of fan speculation. Where did all of our heroes disappear to? What happens to them there? How will they get back?

This is all undercut by the fact that we know they live. Most of the actors are signed on for 2-3 more movies. On one hand, it sucks to lose the suspense of who lives and who dies. On the other, I’m glad that some of my favorites are definitely going to live to make another blockbuster.

Ant-Man and the Wasp

Everything in every movie leading up to this one was extremely important. The groundwork for Infinity War was laid years ago. So what’s up with Ant-Man? Well, he’s on house arrest.

I’ve heard a few people say they don’t like the Ant-Man movies because they don’t matter. I can argue for the importance of the first film as a palate cleanser during the phase of darkness and grit. This is just a playful romp.

The whole cast performs well, the effects are even better than before and the new additions to the team (Laurence Fishburn!) fit in nicely. I love the shrinking cars and buildings. I still can’t believe T.I. can act.

The problem is that the stakes feel as small as the quantum void. We all know that Thanos’ plan succeeds somewhere at or around the time of this movie, so what happens here barely matters. Sure enough, all of Ant-Man’s firends disappear in the post-credits sequence and that is honestly the most intriguing minute out of the 125 here.

It’s hard to judge this phase without seeing how it ends. Captain Marvel will make her debut in March of 2019 and we’ll see how the Infinity War shakes out in April.

My hunch, based on who survived, is that we’ll lose most (if not all) of the original Avengers next year. The actors are tired of their roles and the franchise’s newer more diverse characters have proven extremely popular.

Marvel has proven that audiences can follow a continuous story over the course of ten years and twenty-something movies. There are even super-fans that keep up with the ancillary streamings shows. Will those audiences stay after their core roster of heroes goes away?

The Marvel Cinematic Universe is an impressive example of how to excel at storytelling, marketing and filmmaking in the post-modern age. It has attracted a lot of pale imitations (looking at you DC) and half-hearted hangers-on (ABC just renewed Agents of Shield for a sixth season). Most of the movies in the series are only remarkable as parts of the whole, but they present a consistently entertaining experience.

I’m glad I took the time to get caught up, but more importantly I’m excited to see what happens next.