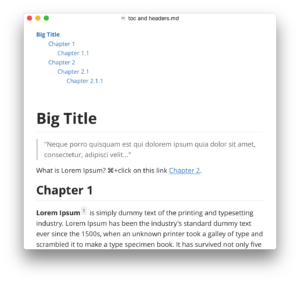 I’ve toyed around with Markdown a little bit in the past as a Reddit user and internet nerd, but I really didn’t start using it in earnest until I spent a lot of time writing on the iPad this summer. I took a recommendation from Jason Snell and started using 1Writer, which is a great minimalist Markdown writer.

When I became accustomed to writing in the language I needed a solution for my iMac at home. After months of passive-agressive searching I think I’ve found my solution in Typora.

Typora is a super minmal Markdown editor for Mac, Windows and Linux that uses Github Flavored Markdown. It’s attractive, fast and stays out of my way. Basically it’s exactly what I was looking for.

There are a lot of great text editors availble for the Mac that support Markdown. However, most of them also support dozens of other languages and are used primarily by programmers. Typora is one of a few editors that seem to focus on prose.

When you open the app you’re immediately greeted with a blank document. When you hover over the window’s title bar you get a word count and an option to open the sidebar. That’s all that’s there. The rest is just a blank canvas for your text.

I almost always launch it directly into full-screen mode. I think its a carry-over from iOS, but I just haste having anything else on the screen while I’m writing.1 I also use Typora’s “Night” theme, which is a light-grey on dark-grey look that is easy on the eyes at any time of the day or night.

As you write Markdown, Typora creates a live preview of your formmatted text. It even auto-completes certain common character sets like square-brackets and parenthesis. Purists may find this distracting or frilly, but I like it a lot. It gives a better perspective when I need to look back to a section above where I’m typing.

The app auto-saves documents to a user-defined folder (in my case, a drafts folder in Dropbox) and can export your document to a handful of common formats including HTML, RTF, PDF and even Microsoft Word’s .DOCX.

My only minor complaint is that I wish I didn’t have to save an exported file for uploading to my CMS. I prefer 1Writer’s option to copy the article to clipboard as Rich Text for easy insertion. The “Copy as HTML” works just as well most of the time, but every once in a while I need to paste Rich Text.

Typora is currently in beta on all three platforms and the developers are sharing it for free during the beta period. If you write anything longer than a tweet on a desktop or laptop I highly recommend checking it out. I’ll almost certainly be picking up a paid copy when it comes out of beta.