Since the middle of the 1960’s rock and roll has been largely focused on songs written by its performers. This hasn’t been the case for every critically or commercially successful single, but third-party songwriters have certainly been pushed further back behind the curtain than they once were. Covers have similarly fallen out of vogue, mostly relegated to b-sides, YouTube videos and live performances. 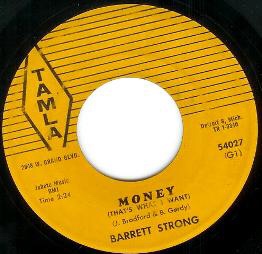 However, certain “standards” continue to receive attention and updated iterations over the decades. My favorite example is “Money (That’s What I Want).” Originally written by Motown founder Berry Gordy and his frequent collaborator Janie Bradford, the song is a simple call and response style rocker about wanting some cash.

“Money” became the first hit record for Gordy and Motown when it was performed by Barrett Strong on a single in 1959. Since then it has become something of a rite of passage. It has been covered by dozens of musicians and reimagined in some truly fascinating ways.

After talking about variations in classical music performance on a recent episode of Dudes Brunch, I wanted to take some time here to explore ten varied versions of “Money.” If you want to play along at home, I have my Apple Music playlist saved for your listening pleasure.

Bradford and Gordy originally wrote “Money (That’s What I Want)” for soul singer Barrett Strong. A slightly swinging piano leads the instrumentation during the opening along with some pretty aggressive tambourine. Strong’s baritone voice echoes slightly as he wails out the opening lines over a simple drum pattern. A classic rock and roll guitar takes over the melodic line while a small group of back-up singers handle the call and response duties. There’s a lot more swing in this iteration than many of the covers, which is characteristic of the time. Strong does some interesting ad-libs in the fade out that aren’t picked up on other versions either. Overall though, the sloppiness of early rock’n’roll is what is most apparent in this 1959 track.

The Beatles version was, of course, my first exposure to this classic. Like the original, the fab four’s cover relies heavily on a piano for melody. Almost all of the swing is lost, in favor of a more aggressive stomping rhythm. John Lennon screeches the lead while Paul and George provide extremely tight harmonized back-up vocals and little “woo’s” on key beats. The sustain on the guitars feels unique, but their tone is pretty similar to the original Motown recording. The Beatles really shine towards the end of the track when they let loose and just jam with it, like they probably did during live performances in Hamburg.

Speaking of, Jerry Lee Lewis’ famous cover of “Money” recorded at the Star-Club1 is as piano heavy as you’d expect. Jerry Lee really pounds away in instrumental breaks after each chorus. His vocal delivery is a little wobbly at times and lacks the aggression of Strong and Lennon. He more than makes up for it in the improvised bridge added around the 3:00 mark. It’s a unique feature that relies on Jerry Lee’s keyboard work and a rock solid backing band. The mix buries his guitar player, which is unfortunate since it seems like he’s doing a great job with the song.

Out with the funk and in with the Motown sound, Gordy revived his 1959 composition for The Supremes. A funky rhythm guitar and a horn section give this cover that Supremes style. Diana Ross’ lead vocal feels prissy yet effortless and the backing vocals are kind of buried as a result. Buried as a cover on the second side of an album with a half dozen hits this version doesn’t get considered as often as The Beatles’, but I’d consider it just as important to the song’s evolution for the change in instrumentation.

Towards the end of The Beatles, Lennon brought “Money” back as a cover in his solo set with the Plastic Ono Band. His vicious vocal delivery remains, but the harmonized back-up vocals from his band mates are obviously missing. For whatever reason he and the band also slow the song down as well. The result is a somewhat lethargic performance too reliant on the middle eight guitar solo and John’s screaming in the closing chorus. Years in the studio with no touring are definitely showing themselves here.

A few recordings of Iggy Pop singing “Money” exist and are notable if only because The Stooges seem to have never formally released a cover of the song. Scott Asheton’s drumming is the highlight of The Stooges rendition. He plays frantically, with proto-punk volume and rapid-fire fills. His brother Ron doesn’t seem to get a handle on the guitar part until one minute in when he suddenly starts wailing all over it. Iggy’s vocal is whiny and almost off-key in places, which betrays that these are demo recordings. Overall, a solid attempt, but they were outshined by another cover in the same year.

Immortalized (for me at least) in Empire Records, The Flying Lizards’ cover of “Money” is perhaps the weirdest. Clanging metal takes the place of the traditional snare drum. A dulcimer-like electric piano plays the lead as straight as an arrow. The female lead vocal is nearly spoken word, the backing vocals are in a bizarre harmony and the only guitar on the track is a blur of feedback after each chorus. This cover sounds like it could have been released in the mid-80s. It’s way ahead of its time in employing synthesizers and a new wave aloofness. There’s an almost ambient bridge with some pretty trippy phasing and artificial echo. One of the vocalists is even shouting through a megaphone on this thing. If a cover is supposed to be a reinterpretation, the Flying Lizards go far above and beyond everyone else so far.

I initially included Hanson’s cover on my playlist as a joke, but the vocal harmonies ended up making it work for me. The ad libs are abysmal and the piano lead is pretty lifeless. However, the brothers Hanson have also had great harmonies and this cover is no exception. They lean on group vocals throughout the chorus, playing to their strengths, but the solo verses are a little cringe-y. If nothing else, this is a worth a listen just to remind you that this band is more than “Mmm’bop.”

The neo-psychedelia outfit Secret Machines have re-interpreted a number of classic songs over the years. Their work on the Across the Universe soundtrack was truly impressive. On this surprisingly mellow cover, the band draws out the melodic progression of “Money” to turn it into a dark and mournful ballad. Front-man Brandon Curtis’ whiny indie-rock crooning is a far cry from the barbaric yawp of John Lennon. With a sort of Lou Reed inspired snark he makes lines like “They say the best things in life are free” feel as though they were always satire. Atmospheric synths and a plucky keyboard give way to distorted guitar in a bridge that feels almost cinematic. Clocking in at 7:07, this is the longest version of “Money” I could find. It drags on a little too long, in my opinion, but I love the unique approach.

This remix became the catalyst for this post, when it came up on an Apple Music workout playlist last month. CID and Bahary’s re-work borrows that iconic female vocal from The Flying Lizards to great effect here. The Lizards’ chorus is heard briefly, but this remix focuses mostly on the pre-chorus. The line “I want money” is sampled repeatedly over a crescendoing synth pattern. Additional backing vocal samples are used as a supplement to the snare drum. Verses are used as builds to bass drops. A cha-cha slide esque drum break in the center of the song is its only dull moment. Gordy and Bradford could never have seen this coming.

Listening to ten covers of “Money (That’s What I Want)” for the last month has shown me how the essential elements of a song can be adapted to any number of genres and styles. A song written for a soul singer can become a club banger, but only by incorporating the vocal delivery of an art-rock cover from thirty years earlier.

As we approach the 60th anniversary of the original recording in 2019 I’m glad to see this song survive. It’s one of the catchiest in the modern pop canon and is obviously adaptable to many styles. Who knows, maybe we’ll see an indie folk iteration or a retro-rock banger rendition. I just hope people don’t stop playing this one for a while.