This is where I gave up on seeing the movies as they were released in theaters. Of the six movies in this set I had only seen one before. 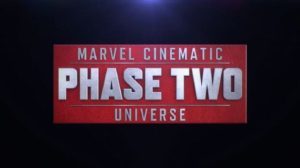 Overall, I enjoyed Phase Two, but it does feel a lot like a twelve hour sequel to its predecessor. Many of the films in this phase are following up origin stories, but they don’t quite recapture the magic.

These films, released between 2013 and 2015, are also considerably darker. There’s a grittiness and a grayer color palette here. It seems like executive producer Kevin Feige felt like he needed to prove his films had weight.Themes of surveillance, corruptible power and the civilian toll of superheroes are preached from on high here.

The notable exception, Guardians of the Galaxy, was rightfully praised for breaking the mold. It was the only Marvel movie I saw over these three years, and it is still my favorite of the bunch.

I must have fallen asleep during this movie on a plane or something, because I remembered the beginning and the end on this viewing. Tony Stark has PTSD and some other unchecked mental illnesses that nearly cost him his life, his partner and a lot of civilians. Downey portrays the trauma well, but the script holds him back in a few key moments. The Mandarin is almost unbelievable as a villain, and then it turns out he’s supposed to be. Extremis isn’t explained very well and the final confrontation, while interesting is also kind of insane. I really wish they would have let Jon Favreau go three for three on directing these films.

The Dark World follows the same story beats as its predecessor, but spends way more time on Asgard. This makes it somehow feel both repetitive and uniquely boring. The sci-fantasy element of parallel planes of existence could have been interesting, if the movie hadn’t literally made a joke out of how dumb it was. Stellan Skarsgard and Chris Hemsworth both put in admirable performances. Natalie Portman is turned into a hot potato for the characters to pass around as if she has no agency. And former Doctor Who star Christopher Eccleston is wasted on a boring big bad.

This could have been two good movies. Instead the Russo brothers were asked to combine a great spy thriller about the fall of an international defense agency and a character study of a brainwashed assassin.

The first half of the Captain America sequel is a fast-paced espionage film full of deception. Nick Fury gets to be a badass, Natasha Romanoff actually has chemistry with another character and Steve Rogers learns about the modern world. There’s a lot to love about this movie before you even hear the name “Bucky Barnes.”

The pursuit of the titular Winter Soldier throughout the second half of this movie feels shoehorned in. It was obvious that they needed to re-introduce Barnes for Civil War to work later. However, he’s unnecessary in Hydra’s plot to overthrow SHIELD. Most of the time spent on him is a distraction for the audience and for Rogers. I think there could be a good movie made about the hunt for Bucky, but that potential was wasted in this rushed adaptation.

Anthony Mackie is awesome as The Falcon, and I’m so glad to see him throughout the next few films.

After the whole of western civilization turns on one another in the last film, Guardians makes for a perfect palate cleanser.

Chris Pratt and company are magnetic throughout this fun romp of a movie. The screenwriting here is some of the best in the MCU. This film has quotable quips for days.

Take a deep breath, because you won’t have much time for it in this film. I checked the time at what I thought was thirty minutes into the film and it was halfway over. Even at that fast pace though, this plot line feels rushed.

Its like Marvel told Joss Whedon to take what he did in Avengers and double it. There are more characters, more locations, bigger set pieces and a villain who is literally every and nowhere at once. The result is a dizzying and disorienting film that feels more frantic than fun.

The choreography, cinematography and poor character development leave the fight scenes feeling somewhat meaningless. There are new powers and abilities, but otherwise it feels like a lot of the same.

Characters love each other and turn on one another so quickly I lost track a couple of times. I had no idea that Wanda was supposed to be The Scarlet Witch and I only started liking Quicksilver right before he died. The strain of condensing a years-long comic book series into a single film shows.

God bless Edgar Wright. His stop-and-go pacing and smart dialogue make Ant-Man an absolute delight. Paul Rudd is another example of an actor falling into the perfect role within the Marvel Cinematic Universe. His sardonic smirk fits the Scott Lang well.

After the furious and disorienting carnage of Ultron, this movie feels like a fun diversion. The shrinking mechanics are a little dizzying, but that seems to be intentional. The plot has huge stakes, but it resolves in a (fittingly) small and simple way.

For the most part, Phase Two exists to set the stage for the current incarnation of the Marvel Cinematic Universe. There was no doubt that these movies would succeed commercially, so they bankrolled the expansion of the empire.

There aren’t many surprises here. Many of the themes of these films were already alluded to in the first phase. Most of these faces are familiar, and the handful of new ones who are phenomenal.

We start to see new character here that will become more significant. It was around this time that the franchise was getting heavily criticized for its homogenous lead roles. Phase Three is where the diversity begins and the color palette brightens a bit. And I’m very ready for it after watching these films.