Apple created this problem for themselves. In September 2017, they upended years of iPhone naming conventions to release the iPhones 8 and X (pronounced ten). This instantly created questions about the names for this year’s phones. Would they release an iPhone 9 a year later? 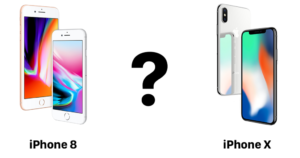 Now that we think we know what the 2018 models will look like, we have to ask even more complicated questions and re-evaluate a lot of outdated assumptions.

This phone will be a direct successor to last year’s iPhone X. It has an Organic Light-Emitting-Diode (OLED) display, no home button and two vertically arrayed cameras.

Traditionally, based on the tick-tock cycle of iPhone names this would be called the iPhone Xs. However, the iPhone 8 didn’t get an “s” generation so I wouldn’t be surprised if that tradition went the way of the Newton.

This phone has a significantly larger footprint, but is otherwise the same as the 5.8″. In years past this would have been called a “plus,” due to its larger size (i.e. iPhone 8 plus).

This is the curveball. Clocking in at a 6.1″ diagonal it is somewhere between the other two phones in physical size. It uses a Liquid-Crystal Display like the ones in all iPhones 8 and earlier. This phone also only has one camera lens, placed in an extruding bump similar to the one on the iPhone 8.

Based on the case specifications and the significantly cheaper display panel, many analysts are expecting this phone to be priced way below the other two.

In the past, there have only been two low-priced ‘new’ iPhones: the SE and the 5c. The SE was thought to be a concession to users who didn’t want the larger sizes of the iPhone 6 generation. The 5c was a commercially unsuccessful budget phone made out of cheaper components.

How could Apple name these iPhones?

There are a few different iPhone naming schemes Apple could introduce this year. Almost all of them will create confusion for the lay-consumer. And whatever they decide will dictate the branding of the world’s best-selling phone for years to come.

I’ve assembled a table of some of the possibilities here:

What’s in a number?

The above are just the first nine sets of options that I heard or thought of. I’m sure the branding team at Apple has gone through at least a half dozen more arrays. All of them end up begging the same question though: “What’s in a number?”

I would argue that the average consumer’s expectations of the device are tied to the number.

In the past Apple has kept older, lower-numbered, phones in the lineup and discounted them as a budget solution. For example, at the time of this writing the iPhone 8 starts at $699 while the iPhone 7 starts at $549.

This has been Apple’s solution to the “low-end” of the market for almost a decade. And while this does saddle budget buyers with outdated tech, it creates a consistent nomenclature.

The average Apple Store visitor can easily tell the price difference between iPhones 6 and 7. They can also see the number of additional bullet points under the “tech specs” and gather that the 7 is faster, newer and better despite looking nearly the same.

I, like many analysts, would appreciate a respite from the numbers. The rest of the market may not be ready though.

The Path of Least Resistance

The new LCD phone will probably cost more than the iPhone 8  currently does on its release day. Naming it the iPhone 9 allows Apple to keep the same name/pricing model on the middle-to-low-end devices.

However, the lack of substantial changes to the 5.8″ OLED would suggest that it isn’t “deserving” of a new number. This phone could become the iPhone Xs (ten-s), much to the chagrin of some commentators.

iPhone naming isn’t about pleasing the pros though. At the end of the day, Apple’s goal should be to use a system of names that anyone can understand.

With that in mind, I expect to see a lot of numbers next week. Everyone, in every country, can at least understand that 9 is better than 8.