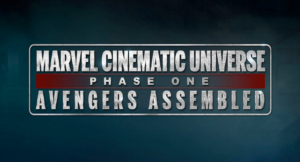 Prompted by The Incomparable’s Summer of Marvel I’ve decided to watch all of the films in the Marvel Cinematic Universe in chronological order. I recently finished Phase One, which runs from 2008’s Iron Man to 2012’s The Avengers.

This weekend, The New York Times published an article on the evolution of superhero films and TV shows that included a brief look at the early MCU:

The legacy of director Jon Favreau’s “Iron Man,” the first film in the official Marvel Cinematic Universe, can be seen in theaters three times a year like clockwork, as Marvel cranks out a serialized story, one gigantic hit at a time. As Hugh Jackman was to “X-Men,” the casting of Robert Downey Jr. as Tony Stark (originally created by Stan Lee, Larry Lieber, Jack Kirby and Don Heck) was integral to the movie’s success and influence.

Up until this summer, that was pretty much how I understood Marvel’s movie-making juggernaut. I knew that Downey’s Iron Man was the linchpin and that the movies made a lot of money.

Watching the films again, and listening to The Incomparable’s coverage, I’ve started to notice interesting nuances in each film. The MCU, on the whole, isn’t as vapid as I remembered. In fact, there’s a lot to learn from Marvel about the evolving culture of America in the 21st century.

I don’t think I’m breaking any new ground here. There have been a lot of great works written about these films over the past decade. I just wanted to share my impressions as I’ve been watching and thinking a little too much about these movies.

The start of it all. Re-watching Iron Man felt like visiting a familiar place and realizing how poorly you remembered it. I completely forgot how much of this movie takes place in Afghanistan. In hindsight, that was a somewhat risky move on Marvel’s part. As the first film in a crowd-pleasing mega-franchise, Iron Man takes a surprisingly harsh stance on the military-industrial complex. It’s also fantastic to watch Robert Downey Jr. enter the role of Tony Stark with a fresh face and razor sharp wits. It makes his performances in later movies feel very tired.

A lot of people don’t even think of this film as a part of the Marvel Cinematic Universe. There’s pretty good reason to think that way. The only real crossover is a Tony Stark cameo in the last scene. It was also produced concurrently with Iron Man and released just three weeks later. And audiences still had a foul taste in their mouth from 2003’s  Hulk. This movie had no chance to succeed. It’s unfortunate, because I actually really like Ed Norton as Dr. Bruce Banner. He was less fond of the role and exited before The Avengers. This is a lesson in wasted potential.

I somehow skipped over Iron Man 2 when it was released. Though not quite as timeless as the original, I have to say, Jon Favreau put together a fun film here. The addition of Don Cheadle rounds out the cast nicely and his War Machine character softens the franchise’s stance on the military. Two years into the project things start to feel more familiar here. The MCU aesthetic is beginning to take hold as more crossover character appear. There’s an unfortunate amount of video game-ificaton in this movie including a pretty cringe-worthy climactic fight scene. It was 2010, after all, and everything was about selling those licensed products.

I expected that I would hate this one. I avoided it like the plague in 2011, which was wrong of me. Thor is a delightful romp of a movie. A lot has been said about Tom Hiddleston’s Loki. It’s a great performance, but Stellan Skarsgard and Kat Dennings make this movie work for me. I love their human reactions to the supernatural. Dennings, in particular, gets some of the best quippy lines in the film. I love the running joke that her character can’t pronounce Mjölnir. There’s a valiant attempt to blend science and mythology here, but it doesn’t land nearly as well as the jokes do.

Maybe it’s our current political environment rubbing off on me, but I didn’t remember how campy this movie is. The whole training sequence with Steve Rogers before he gets injected with the Super Soldier Serum is super long and almost twee at points. This movie has more montages than the series finales of some sitcoms. That combined with the extreme earnestness of the wartime environment has really aged this one poorly.

This is where things start to feel familiar. The Avengers feels like a tentpole action blockbuster of the 2010s. It has a massive ensemble cast, snappy banter and a ton of set piece action sequences. Some of the Captain America camp remains, but there is a note of darkness in the sheer amount of civilian casualties in the film. This, of course, becomes a key plot point in later films.

What strikes me about The Avengers on re-watching is how crowded and disorienting it is. Throughout the early 2010s, action movies tried to use frenetic camera movement to make CGI battles look more intense. While it certainly is more engaging than the longer shots used in earlier films like The Incredible Hulk, it gets confusing. The climactic battle at the end of this film is something like twenty minutes long and takes place across Manhattan. It’s hard to follow even when you know what’s going to happen.

What surprised me most on returning to the early days of the Marvel Cinematic Universe was the light and playful tone. The common narrative is that superheroes all went dark and gritty after The Dark Knight in 2008. That doesn’t seem to be the case here. The darkest film in this phase is Captain America and even it has a villain with a red skull instead of a face.

I was also intrigued by how long it took before the films started to share an aesthetic and tone. Other than the occasional cameo, the first three origin story films in the franchise feel wholly separate.

As the Summer of Marvel continues I’m hoping to watch through all 20 films in order. I’ll attempt to post a recap after each phase for comparison and further commentary.