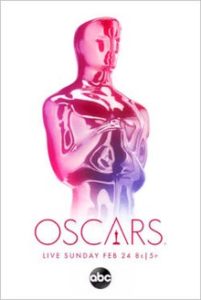 It’s that time again. The 91st Academy Awards are this weekend and I’ve seen a whole bunch of the nominated movies.

In fact, this will be the first year since 2008 that I’ve seen every film nominated for Best Picture. It was a weak year for that category, in particular, but I’m really glad that I saw everything.

Much like the telecast, I’m going to skip a few categories this year. I just don’t feel very passionate about any of the nominated screenplays. I also missed most of the documentaries and all of the short films.

These aren’t the winners I’m going to bet on. I made that mistake last year. The actual awarding of Oscars is based on a series of industry machinations and politicking. These are just my personal opinions on the nominated films.

Enough preamble, let’s get into my picks:

Gaga knocked it out of the park on this one. The song is catchy and holds up to multiple genre variations. The best iteration is, of course, her duet with Bradley Cooper,1 but I like that the song evovles with her character during the film too.

This song rules. Its essential to the plot of the film. Its catchy as hell. I can’t listen to it without thinking about Miles Morales. Nothing from this soudntrack was nominated, which is a damn shame.2

Ludwig Goransson deserves an EGOT. He already dominated the Grammy’s with his production work on Childish Gambino’s “This is America.” The same sonic palatte is used to great effect in his score for Black Panther. He manages to build on the basic themes and styles of other MCU scores to create something totally new and different.

If you have any kind of anxiety, First Man will really mess with you. The sound design is a key part of that. Every rocket launch feels rickety because of the impressive amount of rattling and clattering you hear. It really gives the impression that the Apollo program was just NASA making it up as they went…which they were.

I keep hearing people say they want to move to Wakanda. The world this film creates is so immersive and impressive. I’m completely entranced by every piece of technology shown on-screen. All of it is just familiar enough to make sense, but alien enough to be exciting. Every little detail was obviously designed by a meticulous team of artists. I need to see some behind-the-scenes footage on this.

This may seem like kind of a curve ball, but I really liked the CGI stuffed animals in this movie. They feel very real, in the sense that their fabric gets dirty and snagged. I think at one point you even see some pilling on Pooh. There are so many impressive textures, most of which are completely synthetic.

So many amazing dresses.

There are so many details packed into the two hour run-time of this one. The archival footage, flashbacks, infographics and original footage mix well most of the time. The complex timeline of events never gets confusing. It feels more like a super long educational YouTube video than a movie, which I don’t think is a bad thing.

Animated Feature: Spider-Man: Into the Spider-Verse

We’re going to be talking about this movie for a long time. It is truly a revolution in animation technique. Its also the first film I’ve seen in 2D and honestly felt like I missed out on the 3D experience. Nothing compares.

Actor in a Supporting Role: Richard E. Grant, Can You Ever Forgive Me?

It’s too bad that this is a true story, because I want a spin-off that focuses entirely on Grant’s portrayal of Jack Hock. There’s so much mystery and majesty in this character. He’s the homeless king of New York. Everything is pageantry. Nothing is sacred. No one is to be trusted. I couldn’t take my eyes off of him for the entire film.

Actress in a Supporting Role: Rachel Weisz, The Favorite

Weisz carries this film, which is saying a lot in this kind of cast. Everyone is impressive, but she’s on another level. Her fury is palpable and her motives are always a little quesitonable. Her surprise return to the palace after a near death experience is the best revenge scene of the year.

Truly transformative. Bale is completely believable as former vice-president Dick Cheney. I particularly loved the scenes where he is plotting and scheming on his next move. Bale manages to make it seem like his gears are really turning, despite the make-up and prosthetics.

Actress in a Leading Role: Glenn Close, The Wife

This was one of the hardest picks for me to make. I loved a lot of the performances that were nominated, but Glenn Close’s meltdown at the Nobel Prize Dinner in The Wife really clinched it for me. She spends most of the movie hidden behind an aloof persona, but in this climactic scene she is completely vulnerable and totally furious. It feels totally earned. The rest of the film is just fine, but Glenn Close is a firecracker.

Cuaron’s vision is perfectly executed in Roma. His long takes and massive tracking shots create a constant sense of anticipation in an admittedly slow-moving film. Every scene has depth and every frame is a painting. By lingering in certain scenes Cuaron encourages your eye to wander and take in every detail. His cast are performing vignettes in the background of each shot, just waiting for you to catch a glimpse of them. This is truly the work of an auteur.

None of this year’s nominated films affected me as much as Roma. I’ve thought about it the most out of all of them, by far. It also got the most buzz. The performances were impressive, the cinematography was gorgeous and I thought the class dichotomies were portrayed brilliantly. It certainly isn’t for everyone, but it really worked on me.

Beale Street was robbed. It was my favorite movie of the year and I don’t understand why it didn’t get a Best Picture nod. Don’t @ me unless you love Beale Street.

If last year’s picks are any indication, I’ll probably wrong with most of these. And I’m fine with that. For the most part, the Oscar’s are just my excuse to go see a bunch of great movies and bet on something with my friends.