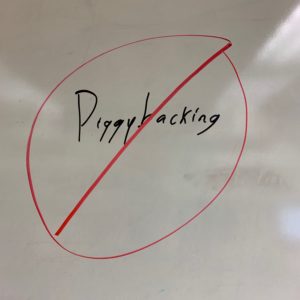 It started around the time I was in second or third grade. That was when I first heard the phrase “piggybacking.”

If I remember correctly, our teacher actually taught us this terrible turn of speech as a class. I have a vague memory of her writing it up on a chalk board. She told us all that this is what one should say when following on someone else’s spoken thought.

And since we were elementary schoolers we all dutifully nodded and began using this corrosive colloquialism in every single conversation.

Seriously. My classmates and paraded this word around like it was god’s gift to his chosen people. I suppose that was bound to happen, but it became incredibly annoying (to me at least) very fast.

Twenty years later, I still wince when I hear people say “Piggybacking off of that…”

The phrase just feels so clunky and childish to me. I always wondered if that was because of my own experience or if it really is just a weird bad figure of speech. That’s why I started to look into where “piggybacking” came from and how to avoid using it.

I don’t know what I was expecting to find when I started googling around for the origin of “piggybacking,” but I kind of assumed it would have something to do with the behavior of pigs. Spoiler: It doesn’t.

Piggybacking is actually believed to have derived from a misunderstanding of an earlier term that sounded phonetically similar.

Meriam-Webster Dictionary, on the origin of “piggyback”:

The adverb piggyback likely began as “a pick pack.” Another early form of the word is pickback, evidence of which can be found in the still-extant variant pickaback.

I went back to Google to learn more about “a pick pack” and “pickback,” which were both referenced in a Boy’s Life article about “piggybacking”:

The ‘pick‘ part means ‘to carry or to pitch’. ‘Back‘ refers to the load and the place it is carried on a person’s body. In other words, ‘pickback,’ literally means “carry a load on your back.”

This is where the story gets interesting. By the 18th century, “picka-back” was the most common form of the phrase. But it was confusing. The “back” part was obvious, but everyone had forgotten where “picka” came from.

So, people came up with a word that made more sense. So, ‘picka’ became ‘piggy’. While it didn’t make much sense, pigs aren’t great at hauling, it did stick. By the 20th century, we settled on the ‘piggyback’ spelling and the rest is history.

So this whole thing was just a misunderstanding. It was a bad pronunciation turned into utter nonsense. Pigs don’t even really ride on each other’s backs.1

And yet I was taught to use this phrase as if it were one of the most important items in the rhetorical toolkit of the english language. If anything my mild frustration has now turned into a full force vendetta.

How to avoid “Piggybacking”

There are a lot of ways to express that your idea builds on another previously stated concept without talking about farmyard mammals. I’ve put together a list of alternatives here so that we all can hopefully stop speaking nonsense like my elementary school classmates.

I really like using “building on” as an alternative, because it implies a constructive progression as opposed to a parasitic free-loading relationship. Some ideas require other ideas. The new thought doesn’t just ride in on the back of the earlier one, it builds a new concept on top of the existing foundation.

Sometimes your idea doesn’t build upon or contrast with the original, it just happens afterwards. That’s where follow-up2 comes in. Your story, development or hot take can “follow up” on just about anything that happens before it linear time.3

Like “following up,” just more explicitly stating a linear relationship.

Your idea is similar to the other idea. Just say that it is. That doesn’t make you any less creative or intelligent.

And you’ll certainly sound more intelligent saying this than you will talking about pigs.

Don’t make life any more complicated than it is. Just say you think the same thing.

Almost no one has any truly original thoughts anyway.