Today is the last Monday of 2018, which means this is my last post of the year.

Earlier this year I bet Jeff Casavant that we could each publish one blog post every Monday for a year. I’m proud to say that we’ve followed through on our bet. Here’s how it turned out:

Out of 52 total weekly posts, Jeff and I both managed to write more than half. Jeff published 38 posts over the course of the year and I published 43. 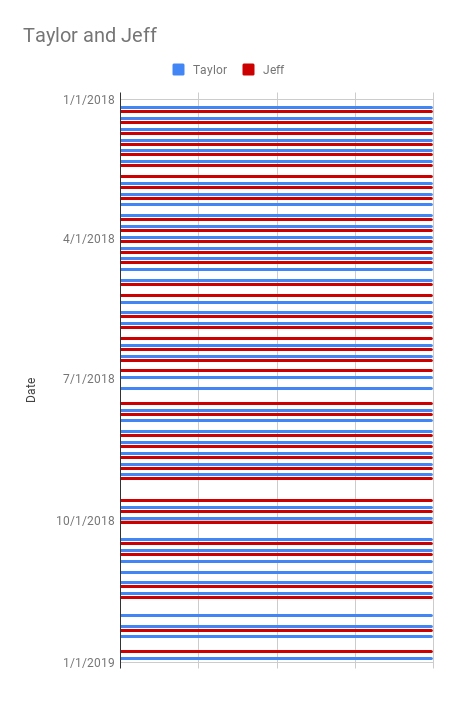 Before our camping trip in November I owed him four beers and he owed me five. We brought some regional favorites with us to the mountains to zero things out.

The holiday travel season really hurt us both productivity wise. Since that trip last month, Jeff has missed three posts and I have missed two.

We met up for dinner and drinks at Sonder Brewing in Mason, Ohio just after Christmas. However, the bet wasn’t quite over by that point (and we both had to drive home) so the score still sits at 3-2.

When we started this bet in January we had no expectations of what we would write about. Technology was obviously going to be a big part of it, but I knew I couldn’t write about Apple every single week. Jeff, similarly, said that he was looking to branch out on his site a bit.

In the interest of comparison, I compiled all of our posts and separated them into the three categories I use on this site: Culture, Technology & Personal. Jeff’s posts were a little harder to categorize, but I took the liberty of lumping them into broad groupings.

My content was split into pretty even thirds. I’m not surprised that personal posts are the lowest ranked category, but I I am surprised at how close they were to overtaking tech. I felt like a tech blogger who dabbled in music and personal essays this year. The numbers don’t realy show that though. Apparently I had a lot of feelings to share. 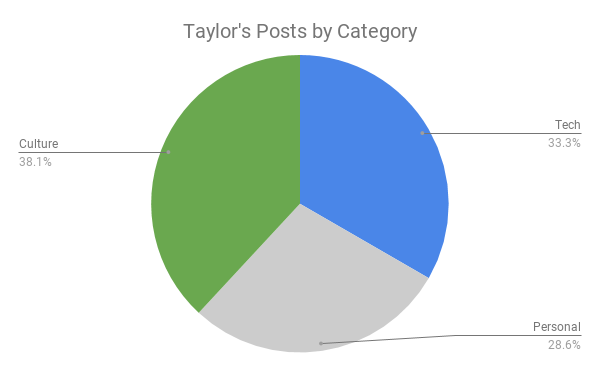 To be honest, I expected my content graph to look a lot more like Jeff’s. Just over half of his writing in 2018 was focused on technology, followed by cultural pieces and then personal writing. I included most of his political and organizational communication related posts as “culture,” because they were too abstract to be personal in most cases. That may be why that category seems slightly inflated. 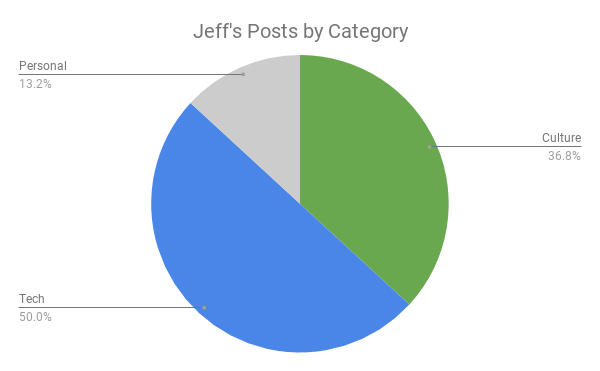 Jeff and I had a debrief at the brewery and realized we’d learned quite a lot from this process. I can’t speak for him in this department though, so here are a few things that stood out to me:

I wanted to take this bet as an opportunity to learn how to write in Markdown. I’m so glad I put in that time earlier in the year so that I could write faster as time went on.

I now have apps on all of my devices (more on this in future posts) where I can easily hop back in to a draft and start working. The files are all incredibly small too, which makes it easy to access them on cellular data and slow airplane wifi.

Markdown has also been a huge help to me outside of this blog. In my new role at Georgia State University I’m constantly editing website copy. Being able to move a 1,000+ word webpage into Typora helps me clearly define the information hierarchy of a page before I get bogged down in visual design.

Working in Markdown and optimizing for SEO has forced me to build in more headings and clean breaks between thoughts. I can tell that my writing still needs more structure though.

The problem is that my posts are mostly written in a stream-of-consciouness style. This is fine for my rambilng personal essays, but it makes me cringe when I look back at some of my more information dense technology posts.

I need to go back to freshman English and learn how to do pre-writing again.

Careful readers of the site will notice that I’ve been experimenting with my rhythm in the last few months.

I got some great feedback this summer saying that I was writing too academically. That’s not that surprising. I hadn’t really worked on any long-form writing since college.

I’m still fighting the urge to make all of my sentences run-ons. I overuse alliteration. I can tell that my paragraph breaks are sometimes awkward. Overall, though, it does feel like I’m making progress.

Jeff and I decided (over beers, of course) that we both want to keep writing. We’ll continue to publish blog posts throughout 2019, but they won’t be as regular.

The weekly schedule was a really good way to hold each other accountable, but it is ultimately unsustainable. We have full-time jobs and personal lives after all.

We spent a lot of time that evening talking about the idea of a personal aesthetic. Part of the joy of blogging for me, has been developing that sensibility.

I don’t have grand ambitions of leading a blogging revolution or even maintaining this site for more than a decade. I certainly don’t write prolifically or professionally enough for that. The idea of the site as a space unto itself, known or appreciated for a specific kind of content, is appealing though.

I expect that as I write fewer, but more focused pieces in the coming year I’ll start to develop that aesthetic. Or at the very least, I’ll have fun trying.