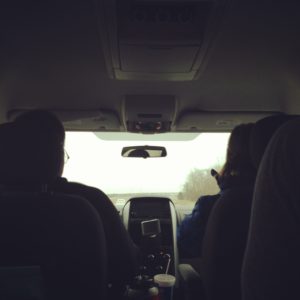 Christmas has always involved a lot of time in the car. When I was a kid, we always drove to see my grandparents (both sets) every Chrismas. We’d visit one side of the family on or after Christmas Day and the other on New Year’s.

It is exactly 206 miles from my parents’ house to each of their parents’ houses. That’s 412 miles roundtrip for each. 824 miles per year.

Those twelve hours in the car felt like an eternity as a teenager. Sure, I had my iPod or a GameBoy, but they didn’t help much. There’s something about the endless cornfields of rural Ohio that makes truly reaching zen and zoning out feel like an impossible ideal.

These trips all started the exact same way.

Someone had to go put a blanket down in the car for the dog. Then the boxes and bags were brought to the front door, while somone took her outside one last time. Once the presents were packed, the pup was pushed into her place.

My brother was literally always the last one buckled in. He would wander outside still eating breakfast, wearing a shorts and a T-Shirt before being told to go back inside and get a jacket. The sattelite radio would sing cheery Christmas songs while the rest of us sat and steamed up the windows, waiting for him.

Speedway is a half mile from the house. We could get gas anywhere in town, at any time before the trip, but it was always Speedway at the last minute. How else would you get 72 ounces of Diet Coke for the road? The dog was not a huge fan of these stops, but the rest of us desperately needed the caffeine.

And then we’re really off to the races. Take 125 to 275, then either 75 North towards Toledo or 71 North towards Columbus. Always north first though. At least that way there might be some snow. My mom would always try to make polite conversation, but by the second stoplight my brother and I were engulfed by our earphones. She’d usually take a nap once we hit the highways anyway.

When I was much younger I would try reading on these trips. At some point or another it started making me sick, so I switched to music and never looked back. You can listen to a lot of songs when you’re sitting in a car for three hours at time, four times in one week. That’s where I experienced a lot of the classics for the first time. You can listen to The Who’s Tommy in almost exactly the amount of time it takes to drive from Cincinnati to Columbus. Pink Floyd’s The Wall will get you all the way to a gas station betwen Troy and Piqua.

When we reach those halfway points there’s always a process in the parking lot. Someone has to take the dog. Someone’s gotta pump the gas. They tell the other two their drink and food orders. Return to the same seats once you’ve completed your task. On a good day this all takes less than ten minutes. Let’s be honest, though, this is an interstate exit in Ohio over the holidays. There’s most likely a mob of many more mobile families in line to do the exact same things, in the same order, at the same time.

Then there’s that last leg. Anywhere from 90 minutes to two hours depending on construction traffic. By this point the songs are on shuffle, because I can’t settle on anything. Everyone’s getting fidgety. Even the dog is napping less. On 71 there are more and more house to look at, whereas on 70 there are less and less. Either way things start to feel more familiar.

The last half hour is the hardest. No matter how many times we made these trips it never got easier. Not only does it feel like you’ll be there any minute, you also have to prepare for getting there. Knowing that as soon as you get to the door it’s “Merry Christmas! How are you? Do you need anything to eat? How was traffic?” After three hours of isolation it takes some effort to wind back up and be social again.

We’d visit for two to four days and then turn around and do it all again in reverse. More Christmas songs, more Diet Coke and so many more miles.

Now, I live in Atlanta (477 miles on 75 from my parent’s house) and I still drive at least twelve hours every Christmas. Six-to-seven hours one way and then six-to-seven hours back. Sometimes with a secondary trek somewhere in Ohio in-between.

It may not feel as festive as some families’ traditions. And it definitely isn’t as fun. But for me, Christmas is in the car.