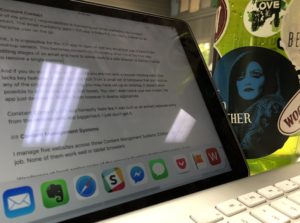 I’ve attended three conferences for work this spring without a laptop. Working exclusively from my iPad while on the road has shown me that many developers aren’t taking iOS seriously. Apple has made some impressive strides in pushing the iPad into portable PC territory, but many third-party enterprise apps for iOS seem to be lagging behind.

One of my primary responsibilities is managing our email marketing via Constant Contact. The email marketing giant’s iOS app is beautiful, but nearly useless for an enterprise user on the go.

First, it is impossible for the iOS app to open or edit any email that was created in the desktop version. This becomes exceedingly frustrating when I’m at the final copy editing stages of an email and have to either work in a web browser or borrow a laptop to remove a single comma.

And if you do start a new email on iOS you are met with a counter-intuitive editor that lacks key features. Emails must be built from a small set of templates that don’t include any of the organizational branding you may have set up on desktop. It doesn’t seem possible to add in-line links in text boxes. You can’t even resize your own images, the app just decides to display them however it deems appropriate.

Constant Contact’s iOS app honestly feels like it was built as an entirely separate entity from the desktop/web app juggernaut. I just don’t get it.

I manage five websites across three Content Mangement Systems (CMSs) in my day job. None of them work well in tablet browsers.

WordPress at least scales some of the pages in its admin dashboard for mobile, but its still filled with tiny links that make for impossible touch targets. Other CMSs don’t scale at all, forcing me to pinch and zoom all over the place.

My biggest issue is, surprisingly, text entry. Most CMSs have large text-fields where the user inputs the content for a page. Selecting these text fields in a browser is hard enough as iOS often interprets them as a form or an image. And if you use an external keyboard, like I do, most browsers will inexplicably scroll the page down when you start typing. The result is that I’m typing blind and have no way of getting back to my insertion point without de-selecting the text field and dragging the page back up.

I honestly don’t know how many of these issues are the operating system, the browser or the content management systems. Regardless, these seem like problems we should have worked out by now.

I’m not the first and I certainly won’t be the last creative to complain about Adobe’s iOS apps. When the software behemoth initially moved onto the platform they broke apart the features of their flagship app Photoshop into a series of mini-apps. This strategy has since been extended to the whole suite of design apps including features of InDesign and Illustrator.

While small apps like Photoshop Fix are great on iPhone, they’re infuriating on the modern iPad and iPad Pro. These devices are just powerful, and in some cases more powerful, than the Macs that we use to run the full Adobe Suite. So why can’t I get anything close to a full-featured version of InDesign, Illustrator or Audition?

Adobe has spent so long investing in their small spin-off app strategy that third-parties like Procreate, Concepts, Affinity Photo, Ferrite and PDF Pen are eating their lunch. At this stage I’d almost rather Adobe just buy them so that I could sync my projects across devices.

It’s been nice not traveling with all of the weight of a MacBook for these past few months. However, I can tell I’m not getting as much work done as I used to while on the road. And that’s really a shame. If Apple wants to keep promotion the iPad, and particularly the iPad Pro, as a replacement for your laptop they’re going to need app developers to at least meet them halfway.