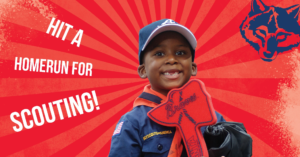 This campaign celebrated the inaugural season of SunTrust Park, across the street from the Atlanta Area Council of the Boy Scouts of America.

Co-branded content was created during a collaborative photoshoot with the Atlanta Braves. This was used to create creative that was deployed in gameday programs inside the ballpark and in Facebook and Instagram ads.

The social media ads were run on home game days and targeted at parents of eligible youth within a three mile radius of the ballpark.

The campaign earned 10,000 impressions and resulted in 290 sessions on the web page explaining how to join Scouting.