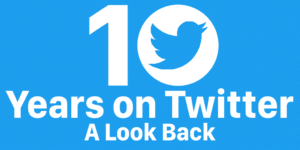 This week, my Twitter-less friend Jeff Casavant asked me to write about the ten years I’ve spent on Twitter.

My first reaction was that being a regular user of Twitter for more than ten years has felt sort of like a death by a thousand cuts.

Don’t get me wrong, I still really appreciate and enjoy Twitter. I check my timeline almost hourly and I tweet on average once per day not counting replies.

My general attitude towards Twitter has changed pretty significantly over time though. I think a lot of that has to do with the diverging interests of Twitter the company and Twitter as a community.

The Cocktail Party of the Internet

I joined Twitter in December of 2008, back when most tweets were sent and delivered as text messages. Many of my early tweets read like things that would be sent to a group text thread today.

In those days Twitter was still a pretty small place. It felt like an extension of my real world friend group and a chance to reach out and meet new people.

The tech industry had already hopped on, musicians soon followed and it seemed like everybody  worth following was still going to SXSW every Spring.

Third-party apps and data visualizations started popping up thanks to Twitter’s wide open API. The user community invented conventions like the @reply and the retweet. The whole endeavor felt uniquely collaborative.

Gary Vaynerchuk gained a lot of clout during this period and started calling Twitter “the cocktail party of the internet,” where you could run into just about anybody.

It really did feel that way too. Gary used to randomly tweet “What can I do for you?” and then fulfill people’s bizarre requests for favors. Once during college I caught one of these tweets at the right time and he bought me lunch.

The Creation of a Culture

The world of “Weird Twitter” began to emerge in the summer of 2010. Surreal accounts like @Dril had existed since the earliest days, but it was @Horse_ebooks and @ProBirdRights that signaled the popularization of a new kind of content.

These strange comedic snippets added to the growing culture of snark on Twitter. There was a unique brand of witty sarcasm developing among the most engaged users. It matched up with my dry sense of humor and constant media consumption.

In the early 2010s it seemed like the community was growing, but very few “normal” people I knew were joining. Most of my timeline was classmates, media professionals and weird meme accounts. Sports Twitter was becoming a larger demographic, but event here the most sarcastic content was king.

The general public started paying more attention to Twitter in the 2012 presidential election. President Obama’s campaign used Twitter to massive success and had one of the most retweeted posts on the site after their victory.

Then Oreo tweeted a perfectly timed snarky marketing message during a power outage at the Super Bowl. Social media marketers talk about this tweet to this day as the perfect example of capitalizing on a moment in the cultural zeitgeist.

Those two posts, less than six months apart, seem like a tipping point to me. From then on, we all started taking this website more seriously. Social media marketing became an even more massive industry. The jokes and quips during live events like the Super Bowl and The Oscars became a sort of comedy contest. It seemed like this was going to be the sharp, witty, cultured alternative to Facebook.

Then there was Gamergate. It’s hard to express how intense and far reaching this controversy was on Twitter. Everyone I followed was trying to deal with the ramifications. Hugely popular accounts were being doxxed and it seemed like one mistyped message could put you in the harassers’ sights.

There had always been bad actors on Twitter, but this seemed like a new level of terrible. Hate groups and conspiracy theorists started amassing large followings. Twitter (the company) shut down its verification program after “accidentally” verifying a white supremacist.  It started to feel like the company had no system of moderation and was losing control of the community it had spent years building.

Donald Trump has been a notable presence on the platform for about as long as I can remember. He joined three months after me, in March of 2009. By the end of the Republican National Convention in 2016 I think we all knew he wasn’t going anywhere and neither was his rapidly growing follower base.

It suddenly seemed like way more people were on Twitter. Donald Trump quickly became the most notable user of the site and the dominant discussion topic. Everyone was complaining about or cheering for President Trump and no amount of mute filters1 could keep your timeline off the topic.

Now, a lot of people I follow are talking about limiting their time on Twitter or leaving the service altogether. There’s been discussions of “Twitter addiction” and an overall sense of fatigue. Technologists are leaving for alternative services like Mastodon and Micro.blog.

I don’t think I’ll be going anywhere. Most of the friends I joined with are still active on the site. I maintain accounts for work, and I use my personal account to do a good bit of professional networking. Weird Twitter is still alive and funnier than ever.

The last eighteen months or so have definitely made re-think my ten years of tweeting. I imagine I’ll remain a member of the community, but I’m probably going to try to spend less time there.