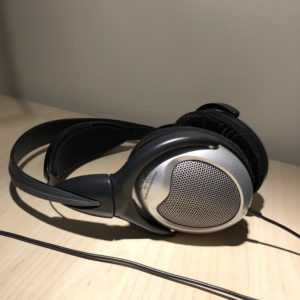 When I was a kid, throughout middle and high school, I used to spend a ton of time just listening to music. I would get a new CD from the library or some new MP3s from some sketchy download service and pore over them for hours. Now it has become a special treat to listen through an album.

I haven’t stopped listening to music altogether, but I’ve stopped just listening to music. I no longer intentionally sit down simply to experience songs. I constantly find that I have to fit music in around the rest of my day. And if I do have a spare hour for an album I inevitably end up doing something else halfway through the first side.

I’m sure part of this is the increased obligations of being an adult and living on one’s own. Another part is probably the insane amount of podcasts I listen to. The abundance of readily available streaming video is certainly a contributing factor as well.

Lately I’ve found myself craving the solitary listening experiences of my youth.

I brought my phone, EarPods and a book to the laundromat tonight. Redundant entertainment to keep me from spending a single moment idle. In the end, I spent most of the wash-dry-fold cycle just listening to music.

For the first time in a long time I sat through an album just staring off into space. Granted, POST- by Jeff Rosenstock clocks in at a brief forty minutes, but it was a nice feeling. I found that I enjoyed the songs a lot more on this listen than I had during the countless times I’ve heard them in the car over the last few months. There was something about the intentionality of it that made them feel more impactful.

When I got home and put my laundry away I kept on listening. Even though there’s an unedited podcast project on my desktop and there are dishes that need washing in the kitchen. I sat in my room ruminating about writing while listening to Television. It felt like old times, even though the band’s sophomore LP Adventure was new to me.

I started my third album of the evening, Pink Floyd’s Obscured by Clouds, while writing this post. I can feel myself ignoring it though, so I think I’m going to wrap things up here and just listen to the music.