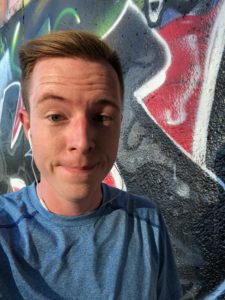 I recently moved, and one of my favorite things about moving is finding new running routes in a new neighborhood. I love the way I’m not entirely sure which direction to take on the next turn, where I might run into a slight hill or which direction I should go to get home

I started running six years ago at summer camp. Running the trails in the evenings after a long day’s work was a great release. And while I’ll always cherish those first runs and the friends who got me through those first miles its running the streets that really made me love running.

My first few runs in the “city” were evening jogs with Shaun Evans and Seth Alexander while I lived in Athens, Ohio. Founded in the early 1800s, Athens is full of winding hilly streets with cobblestone sidewalks and beautiful old houses. In my three years of running around Athens I learned every street in town.

There’s a uniquely intimate kind of knowledge you get about a place from running through it. It only takes one set of hard sprints for you to learn that there are five switchbacks on the way to the top of North Hill Drive. One bad fall and you’ll start memorizing all of the roots jutting up through the sidewalks on the west side. And you’ll learn it takes about one and a half noisy punk songs to get past Miller’s Chicken without stopping and blowing your whole workout on a greasy dinner.

Moving to Atlanta got made me excited for a whole new world of running route possibilities. A city this big was sure to have a great maze of streets to stride alongside. It didn’t disappoint.

My first year in town I lived near Georgia Tech with its winding access roads and wide sidewalks. I was also on the edge of Midtown, Atlanta’s only true urban grid, where I could sprint short blocks. I was putting in some serious miles (for me anyway) and began training for a half marathon. As I started building longer routes I was learning more neighborhoods, passing more restaurants I wanted to try and memorizing more street names. One night on a long run on a new route I hit a crack in a sidewalk I’d never taken before and sprained my ankle. I was off the roads for about a month.

Last year I lived in Buckhead, near a short section of Atlanta’s Beltline Trail. I started running in races for the first time with some friends from work, but my new neighborhood made for some fairly boring training runs. It was a half-mile each way from my front door to the front gate of our apartment complex, and most of that was up-hill on the way out. I still managed to find a few fun side streets though, and I built a really consistent pace since I typically only had to wait for one crosswalk.

In my new place, I’m back in a neighborhood setting (the Old Fourth Ward) and still Beltline adjacent. My first few runs here have all been different. First, I took the Beltline to Ponce City Market for a simple, but beautiful 5k. The skyline views and street art make for great scenery. Next, I ran through the ornate old houses of Inman Park. Now I’m starting to explore some of Atlanta’s earliest side streets and seeing a lot of the same old architecture I remember from Athens.

Running the streets of a city/town isn’t for everyone. Stopping at the crosswalks definitely does break your momentum. There are more pedestrians to duck around than you’ll see on a good trail run. When I’m lacing up my shoes, though, it’s the variety and exploration that keep me excited to get out and hit the pavement. Plus, you really to get to know a city when you run a mile of its streets.